My dear friend, Samantha Mozart, author of The Scheherazade Chronicles blog (http://thescheherazadechronicles.org/?p=4707 ) challenged me to participate in the 5 Day/ 5 Photo Blog Challenge.  You will find her pictures striking and her stories fun and informative so I invite you to take a look.  So in the meantime, I’m racking my brain to see what I can pull out of my memory bank.  Ah-Ha! An idea looms! 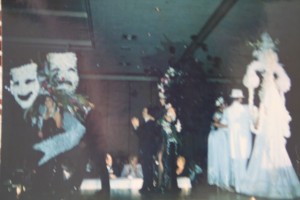 The drum roll begins with the first strains of “Circus,” the music theme. The trombones, clarinets, and saxophones sing their merry strains; the audience expectantly waits, while I look around for a way to escape, as a mouse caught in a trap. I’m wondering how I managed to get myself in this position of modeling a floral float at the Teleflora Headdress Ball at the Westin Hotel in downtown Seattle in front of this huge crowd and TV cameras.

Oh yes, I remember now, I had always wanted to model, but I was too shy.  So, my life changed when my friend, Carol, said to her parents, who owned a small Telefloral shop, “Gwynn’s tall, she could wear a sizeable headdress.”  What I do for friendship.  Now visualize the Rose Bowl Parade and all those gorgeous floats covered with flowers.  I am about to wear one of those as a headdress on my head. 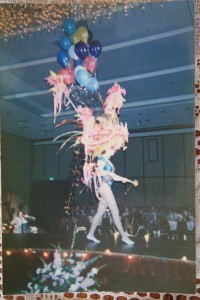 By now my knees are shaking, my hands are sweating, but I’m more worried about the pool under my arms overflowing and running down my sides. I’m petrified.  Yet, my brain frantically churns as I work on convincing myself that I CAN DO THIS!

Since I’m supposed to be wearing a circus hat, we decided that I would pretend to be a tightrope walker out on the stage. Someone handed me a ten foot pole, as my supposed balance beam, just before my turn to head down the runway facing the crowd of people in the packed ballroom. Now picture a “Y” shaped ramp and runway. We are to enter from one side of the stage, walk down the ramp, and return on the other side of the stage.  What no one thought about was the fact that the orchestra was seated in the open space of that “Y” with their music stands and instruments inches from where I’m walking. 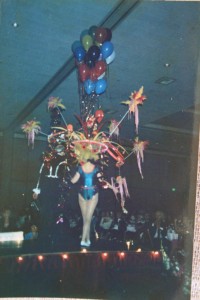 Now, not only do I have to balance the floral float on my head, but I also have to worry about not wiping out the musicians, their music, music stands, and instruments in one fatal stroke. Both the musicians and I realized the problem simultaneously when I rounded the corner from back stage onto the runway, as their eyes bugged out in fear for their lives. I managed to lift my pole, only seconds and inches from the first musician’s head. But changing body positions changed the balance of my headdress and my balance, so then I worried I might fall into someone’s dinner plate below the stage.  Fortunately, despite my waver toward the edge of the ramp, to the relief of the viewers below I managed to stay on the stage.

As the kitten screamed and fidgeted in the cage on my head, I prayed that he wouldn’t let loose with a piddle or a poop.  Then how would I react?  Would I pretend it didn’t happen, to go on with the show, or let out a scream while I was being filmed by Channel 11 TV and the nation for the 10:00 news?  My forehead felt as if it would be permanently indented from the weight of the headdress.  I tried to smile, but what showed up on the cameras was a grimace as I pretended to bounce down the tight-rope and the stage.  The whistles rang-out, the flashes from the cameras popped as if it were the 4th of July.

I successfully walked the length of the ramp, leaving everyone intact. The “lion” was delighted to be released from his cage, my forehead was black and blue for a week, but I achieved my aspiration of becoming a famous model on TV for a whole minute!

Then being a glutton for punishment and being a good or crazy friend, the following year I became Neptune’s Bride for the TeleFloral Headdress Ball.  This time I wore a six foot Oyster shell on my head.  The good news is that this time there were no live bodies or fish residing on my headdress.  The best part is that the headdress was formed so that it did not indent my forehead.  I also was not carrying a fishing pole so the musicians did not have to worry about my snagging them, their music, instruments, or their stands. 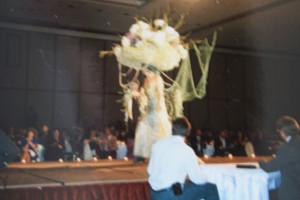 See some of the other headdresses below. 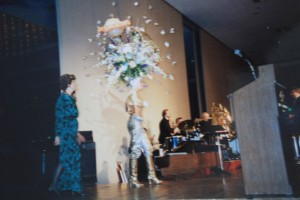 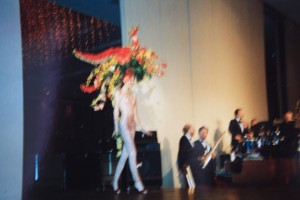 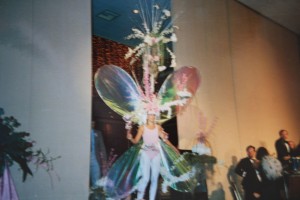 After 20 years of sales and marketing experience in the fields of real estate, high tech, and corporate travel, Gwynn has moved on to the career of “Grandma.” When not teaching her granddaughters an extensive vocabulary of “alley-oop-boop, ups-a-daisy, cowabunga or bummer”, Gwynn can be found hunting for mentors for the Kitsap Youth Mentoring Consortium, or chasing her fantasies on her treadmill. Gwynn currently freelances for magazines.
View all posts by Gwynn Rogers →
This entry was posted in 5 days/5 photos Challenge. Bookmark the permalink.