How to Make a “hit” with your New Neighbor and Sink a Bridge at the same time.

Tuesday, February 13, 1979 my husband and I had just moved into our newly constructed home in Kirkland, Washington by a few days.  Heck, we hadn’t even met our neighbors yet.  My daughter was about to turn three in less than a month, and I had a three month old son.  The weather report talked about storm warnings and high winds.  Usually, our high winds would flip a kite around a bit faster than usual in the sky, but they weren’t anything to write home about.  But that night the winds howled and the tree branches thrashed against the house.  So much for my “Poo-pooing” the storm warning!  Then in the wee hours of the morning an earth-shaking crash made us do a horizontal jump in bed.  Our house was intact, so everything must be OK.

When we awoke that morning, we looked out our front window and to our horror we saw that one of our massive fir trees had up-rooted and had fallen on our neighbor’s home.  We were told the winds reached 90 MPH. So we ran out the door to see if our neighbors were OK.  We couldn’t tell if the tree had squished their home or not.  Puffing as we ran up to our neighbor’s front door we exclaimed, “We are your new neighbors.  Can we remove our tree off your roof?”  Startled, our neighbors had not realized that our tree had hit their home, so they ran around room to room inspecting.  There in the back bedroom a branch had stabbed clean through the roof and extended into the bedroom by about two feet.  My neighbor exclaimed, “I wondered why it smelled like Christmas in here!”  This is how we started our friendship with our neighbors.  Fortunately, their homeowner’s insurance dealt with the problem.  The good news is that it turns out they needed a new roof and the structure of the roof had some dry-rot, so our tree saved them quite a bit of money as the insurance paid for the new roof.  We even remained friends all these years later. 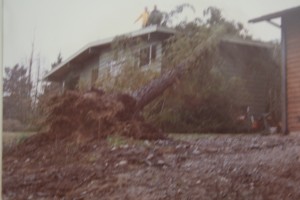 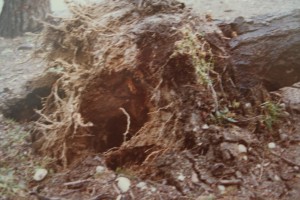 Our tree wasn’t alone in coming down.  It turns out that the winds further northwest were far more violent.  We made a “hit” with our neighbors and sunk a bridge at the same time.

The Hood Canal Bridge is the world’s first floating pontoon bridge. This 7,869 foot bridge, Hwy. 104, connects Kitsap County with the Olympic Peninsula.  But after being battered with 80 to 120 M.P.H. winds, heavy currents, and gigantic waves the western half of the bridge sunk.  The storm snapped the three foot in diameter cables that tied the pontoons together and down went that section of the bridge!

Senator Warren Magnuson, Chair of the Senate Appropriations Committee, immediately lobbied for federal funds to restore the bridge. In the meantime, people commuting to work from Port Ludlow and Jefferson County to the Kitsap County side of the Hood Canal resorted to using a ferry.  October 3, 1982, the Hood Canal Bridge was reopened.  Now, when a storm approaches and the winds reach a velocity of 40 MPH for 15 minutes or longer, vehicles are forbidden from the bridge.

Storms here in the Northwestern part of Washington State really make a hit with one’s neighbors.  Heck, you don’t even have to worry about burning your bridges with people… they just sink! 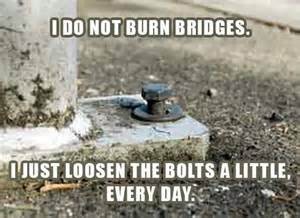 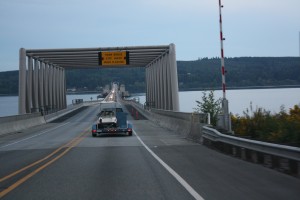 12 Responses to Photo 2 of 5 Day Challenge