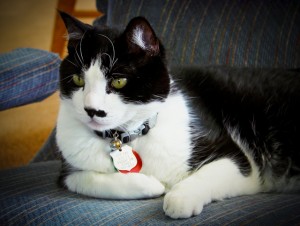 This is in memory of Domino who passed away at age, 14.

This story was published by I Love Cats Magazine in their December 2009/2010 issue.

The garage door slammed as my husband stormed into our home one cold October evening.  I could almost see the black smoke spiraling from his ears.  John had been out inspecting a commercially zoned lot for development, when a truck prowled into the lot. Before John knew it, two tiny black and white fluffs of fur flew out of the truck landing in a dumpster. My husband, as a child, had been known for wearing his kittens draped around his neck. He loves cats! John trembled with rage, fists clenched. He couldn’t bear the thought of leaving those kittens in the dumpster, but he knew that our daughter had a terrible cat allergy. So he came home first, to consult with me. Of course, I grabbed my coat and car keys and said, “Let’s go and get those kittens. We haven’t a moment to lose! We’ll find a home for them!”

It was now 7 P.M. and the kittens were approximately 35 miles from our home. Rush hour traffic still lingered on the highway. At a snail’s pace and an hour later, we reached our destination. Would we find the kittens?  The vacant lot was sandwiched between apartment buildings, so prowling cats lurked everywhere under the dumpster, but we didn’t see the kittens, at first. Then we realized that huddled on the ground, under the dumpster, between two larger cats, was a very diminutive black and white kitten. It appeared to be extremely sluggish in the frosty night air. There was no sign of the second kitten. So as my husband and I approached, the larger cats scattered.  The kitten lagged behind and froze, so I scooped up the kitten with a nice warm towel. During our arduous journey home, this teeny handful of fur’s purr sounded as if it came from the V8 engine of a Cougar! He was totally satisfied to snuggle in my arms. By 11 P.M. after being fed and settled, this miniscule bundle of fur and my daughter were bundled in bed – together!

The next day my daughter took the kitten to the Vet, while I was at work. The Vet said he had never seen a more lethargic and sick kitten.  It was likely this black and white handful of fur would never have lasted through the cold October night.

Our daughter had recently graduated from college and was headed off on her own, so true to my word, we had found a home, our home, for the kitten. We named him Domino, for his black and white markings. Since Domino was a baby and used to sleeping with his former cat family, we decided he would join my husband and me in bed at night. Domino scampered and pounced on the sheets thinking the cat profiles were real cats. The kitten bonded with us immediately and decided he liked several spots in our bed, either down under the sheets at the bottom of the bed by our feet or curled next to my tummy. Domino would nudge me to lift the covers so he could trot on down and curl up.  However, Domino decided that his favorite spot to sleep was the top of my head, the back of my neck, or under my chin. John assured me, “he’s a baby, he’ll grow out of it.” As time progressed and Domino grew, he didn’t “grow out” of liking his favorite positions. However, NOW, the tiny kitten was “the Hulk!” Have you ever tried to sleep with pounds of dead weight draped across your neck? Domino was going to have to be satisfied with sleeping under my chin and I could now use him as a pillow! In the meantime, John and I arose at 5 A.M. to get our exercise before heading to work. Consequently, Domino was used to being fed at 5 A.M. Year after year we maintained this schedule, until I decided to quit work. I was SO looking forward to sleeping in.

However, Domino had other ideas for me. Domino became a one of a kind alarm clock. Unlike an alarm clock’s jarring noise, that launched me out of bed to start my hectic day, my clock starts slowly awakening me with a gentle, soft, silky tap on my cheek.  Since I definitely enjoy my slumber and sleep quite soundly, the repeated pats are easy to ignore. So, unlike any standard snooze alarm, my alarm grows impatient when ignored. My next warning is a furry head bump, just enough to pull me out of dreamland. I push at my insistent “snooze alarm,” and enjoy a few more minutes of rest. Do I really have to get up at 5 A.M?  Can’t I sleep longer? I pull the covers over my drowsy head. Domino starts to get frantic as he continues to head bump me. Finally, Domino takes desperate action. He is convinced he is going to starve to death and wants me to get my lazy body up. So this furry equivalent of an alarm clock quietly creeps up on my pillow, walks over my head, and plops on my face! UGH! I can’t breathe! However he does succeed in waking me! This is how I start my morning every day, with my now 23 pound, black and white, tuxedo cat, Domino, sitting on my head, loudly proclaiming “Get Up and Feed Me!”

Now, twelve years after his rescue, Domino, our “Dumpster Diver” rules the house with a loving paw!

After 20 years of sales and marketing experience in the fields of real estate, high tech, and corporate travel, Gwynn has moved on to the career of “Grandma.” When not teaching her granddaughters an extensive vocabulary of “alley-oop-boop, ups-a-daisy, cowabunga or bummer”, Gwynn can be found hunting for mentors for the Kitsap Youth Mentoring Consortium, or chasing her fantasies on her treadmill. Gwynn currently freelances for magazines.
View all posts by Gwynn Rogers →
This entry was posted in Pet stories. Bookmark the permalink.

12 Responses to The Dumpster Diver: A True Rescue Kitten Story